Join us as Jason Diamond presents his memoir Searching for John Hughes with special guest Megan Stielstra, author of Once I was Cool!! 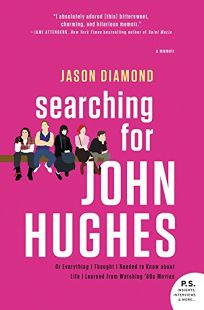 About Searching for John Hughes: For all fans of John Hughes and his hit films such as National Lampoon s Vacation, Sixteen Candles, and Home Alone, comes Jason Diamond's hilarious memoir of growing up obsessed with the iconic filmmaker's movies a preoccupation that eventually convinces Diamond he should write Hughes biography and travel to New York City on a quest that is as funny as it is hopeless.For as long as Jason Diamond can remember, he's been infatuated with John Hughes movies. From the outrageous, raunchy antics in National Lampoon's Vacation to the teenage angst in The Breakfast Club and Pretty in Pink to the insanely clever and unforgettable Home Alone, Jason could not get enough of Hughes films. And so the seed was planted in his mind that it should fall to him to write a biography of his favorite filmmaker. It didn't matter to Jason that he had no qualifications, training, background, platform, or direction. Thus went the years-long, delusional, earnest, and assiduous quest to reach his goal. But no book came out of these years, and no book will. What he did get was a story that fills the pages of this unconventional, hilarious memoir.
In Searching for John Hughes, Jason tells how a Jewish kid from a broken home in a Chicago suburb sometimes homeless, always restless found comfort and connection in the likewise broken lives in the suburban Chicago of John Hughes oeuvre. He moved to New York to become a writer. He started to write a book he had no business writing. In the meantime, he brewed coffee and guarded cupcake cafes. All the while, he watched John Hughes movies religiously.
Though his original biography of Hughes has long since been abandoned, Jason has discovered he is a writer through and through. And the adversity of going for broke has now been transformed into wisdom. Or, at least, a really, really good story.
In other words, this is a memoir of growing up. One part big dream, one part big failure, one part John Hughes movies, one part Chicago, and one part New York. It s a story of what comes after the Go for it! part of the command to young creatives to pursue their dreams no matter how absurd they might seem at first.

Jason Diamond is the sports editor at Rollingstone.com and founder of Vol. 1 Brooklyn. His work has been published by The New YorkTimes, BuzzFeed, Vulture, The New Republic, The Paris Review, Pitchfork, Esquire, Vice and many other outlets. He was born in Skokie, Illinois, but currently lives in Brooklyn with his wife, his two cats and his dog named Max.

Megan Stielstra is the author of Once I Was Cool. Her work appears in the Best American Essays, New York Times, Guernica, Buzzfeed, and on National Public Radio, and she performs regularly in Chicago with 2nd Story and the Paper Machete live news magazine. Her next collection, The Wrong Way To Save Your Life, is forthcoming in 2017 from Harper Perennial.

Searching for John Hughes: Or Everything I Thought I Needed to Know about Life I Learned from Watching '80s Movies (Paperback)